The collaboration’s installation supports the NSF-funded Promoting Learning through Annotation of Embodiment (PLAE) project led by Dr. Joshua Danish from Indiana University’s Learning Sciences program. PLAE is a continuation of Danish’s collaboration with Dr. Noel Enyedy from UCLA GSE&IS and the ongoing NSF-funded Science Through Technology Enhanced Play (STEP) and iSTEP projects, in association with UCLA REMAP. This particular iteration seeks to support classrooms of roughly 25 students in collectively participating in scientific inquiry via a combination of embodiment and the annotation of peers’ embodiment.

Over the course of four weeks in February and March 2017, the project’s design was tested with 46 first and second graders split evenly into two groups. They used their group movement as an interface to media content portraying water molecules in different states (solid, liquid and gas)—exploring the role of attraction in the behavior of particles and the resulting macro-level states of matter. Each session ran approximately 60 minutes and was co-taught by the students’ teachers. Three Kinect 2 cameras were mounted on the drop ceiling to track movement around the classroom. This most recent implementation adds the use of iPad annotations, such as drawing over live video, producing graphs via sliders, and marking important moments of activity via student-generated buttons. 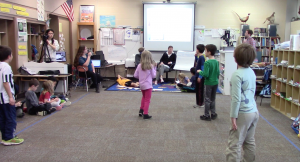 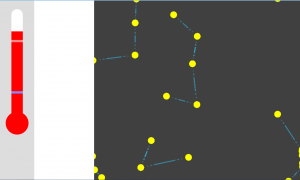 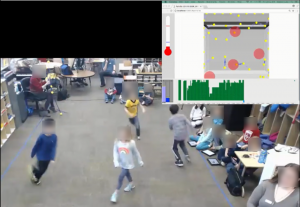 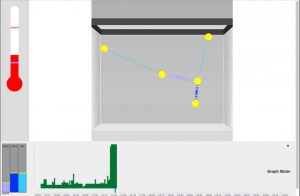