OpenPTrack is now being used for the ongoing Laboratorio de Interactividad Corporal (the Body Interactivity Laboratory) at cheLA in Buenos Aires, Argentina. The Lab got underway this past February, and is developing three new performance pieces that “explore concepts, implications and technologies of physical tracking and augmented reality,” particularly, “as they concern the relationships between the body and memory.”

UCLA REMAP researchers were in residence in February and March—upgrading cheLA’s OpenPTrack installation, providing a demonstration and workshops, and introducing the system to the three multidisciplinary teams invited to create new works based on their proposals. These teams—consisting of Buenos Aires-based choreographers, directors, composers, performers, writers, dramaturgs, media artists and designers—are continuing to collaborate and experiment with OpenPTrack as the interface between movement and media, showcasing their results at milestones.

Joining the REMAP team at cheLA were designers from the Plovdiv Drama Theatre (PDT) in Bulgaria, who were contributing to the demonstration and workshops in preparation for an upcoming REMAP-PDT collaboration.

The pieces are using OPT V2 (Gnocchi) in very different ways. Part installation, part drama, The Artificial Grandparents is probing fading and reoccurring memories within the lifelong home, and as they relate to long-held objects, of a woman with Alzheimer’s disease. Flock is a dance piece wherein the performers and media are working together to express the ebbs and flows of nature, and nature’s memory. Jorge Cárdenas Recovery, also a dance piece, is investigating the relationship of media and shifting memories, particularly as they relate to events of Argentina’s 2001 economic crisis, and the physicality of the Massacre of Plaza de Mayo.

UPDATE: The three pieces will run as part of the Noviembre Electrónico festival at the Centro Cultural San Martín in Buenos Aires, Argentina:

(Please click the show links above for ticket information.)

A glimpse into the Flock work-in-progress: 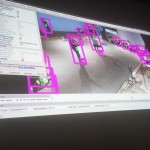 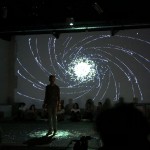